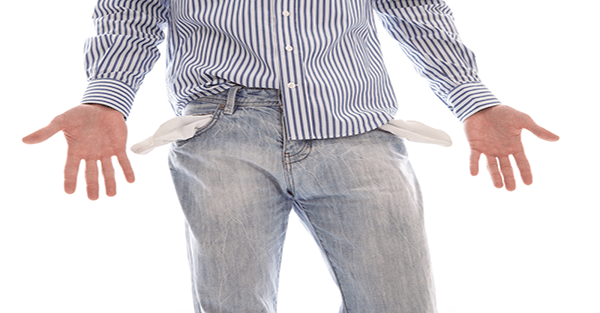 The numbers are pretty startling.

1 out of every 3 Americans has nothing set aside for retirement.

And, according to Federal Reserve data, the median working-age couple has saved just $5,000 for retirement.

How is this even possible?

How could it be that the citizens of the wealthiest country to have ever existed in the history of the world barely have any savings?

Simple. The cost of living has skyrocketed over time. It’s become terribly difficult for tens of millions of people to keep up. Just look at the data—

Housing prices, once again, are at all-time highs. And for those who choose to rent instead of buy, rents in many cities have also reached all-time highs.

This is especially difficult for the Millennial generation, which finds itself spending over of 40% of disposable income on housing costs.

If you add in student debt (which continues to plague millennials), that takes even more money out of their pockets each month.

And God help you if you decide to have children, the cost of which is now at a record level.

According to a study published last year by the US Department of Agriculture (not sure why they’re the ones looking into this…), the overall cost of raising a child from birth to age 21 is now a whopping $233,610.

Private studies have pegged that amount even higher, in excess of $300,000.

And, not that there’s any inflation, but childcare costs have risen so rapidly that it has become impossible for many families to keep both spouses in their careers.

Then there’s the costs of insurance and medical care, which continue to soar to record levels.

Healthcare costs in the United States are now at the highest levels EVER.

But even more importantly, the RATE at which costs are rising reached their highest level in 32 years.

It’s no wonder that people aren’t able to put any money away… or that, despite a brief dip after the Great Recession, consumer credit is once again exploding.

Just like their federal government, Americans are once again heavily indebting themselves.

And it’s easy to understand why: they just can’t make ends meet.

The tiny silver lining is that wages have finally started to grow, albeit slightly.

But wage growth has been vastly outpaced by the rising costs of major expenses– like housing, childcare, insurance, and healthcare.

If you find yourself in this situation… struggling without any real sense of security… I’d encourage you to at least consider one out-of-the-box solution:

It’s 2017. Your ability to generate income no longer depends on geography.

I have friends who run a small CPA practice preparing tax forms from their beach home in Bali.

Others who do construction work here in Chile.

The biggest thing you’ll notice in terms of your personal finances, though, is that living costs are often remarkably cheaper.

Sure, if you move to Tokyo, Geneva, or Oslo you’re going to be forking over even more money to live.

But the vast majority of the planet is likely MUCH cheaper than where you’re currently living.

I purchased my apartment here in Chile, in one of the nicest neighborhoods in the entire country, for less than what a down payment would be in most metropolitan areas in the US.

And I wouldn’t even regard Chile’s housing market as being particularly cheap compared to other places around the world.

Your medical costs will also drop. Seriously, it’s a joke.

Medical treatment overseas can be incredibly high quality and just a tiny fraction of the cost.

Insurance will cost a tenth of what you’re currently paying, if you decide to have insurance at all.

You might just choose to pay cash whenever you need treatment, and it won’t cost more than a nice lunch.

Childcare? Forget about it. In a lot of places overseas (especially in Latin America or Asia), labor costs are so cheap that you won’t even think about daycare.

Instead, you’ll easily be able to afford your own round-the-clock, live-in help… for far less than what you’re probably currently paying for daycare.

Oh yeah. And your tax bill will likely go to ZERO.

This goes for just about all nationalities, including US citizens.

American expats have some special guidelines that they need to follow, but as long as you have what’s known as “bona fide” residency, i.e. you are really truly living abroad, and not just on paper, you can exclude more than $100,000 each year in “earned” income.

(Note, this does not apply to investment income… but there are ways to eliminate that as well. More on that another time.)

Most households spend tens of thousands of dollars each year on taxes, most of which has gone to fund more wars and more debt.

Just imagine what you could do for your family’s future with all that extra savings.

There are all sorts of other benefits as well.

You and your family may be able to obtain another citizenship.

You’ll have unique international experience that certainly looks good on a resume and differentiates you from your peers back home.

And you’ll have the chance to develop a deep, close network of friends… fellow expats who share your beliefs and values.

I understand that as human beings, we are naturally afraid of the unknown.

And moving abroad is a big, big unknown.

Our ancestors braved that uncertainty once as well. They too were searching for a better life. It’s in our DNA.

So if you find yourself in a similar situation– barely able to stay afloat financially, and insecure about the future– it may at least be worth considering the possibility.