Overheard in the Land of the Free 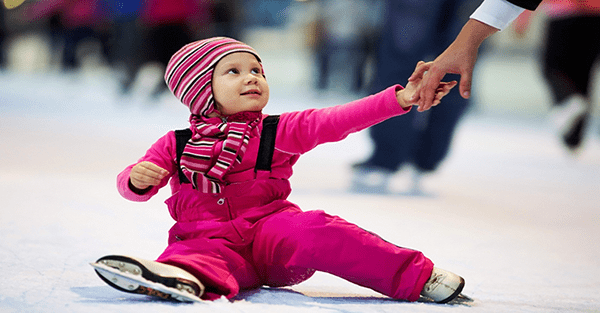 When I was in Texas over the weekend taking a quick break from a whirlwind trip around the world, I went to one of the biggest shopping malls in Dallas to buy a birthday present for the CFO of our agriculture business.

The mall is called the Galleria, and it’s particularly interesting for shoppers because it has an ice-skating rink on the ground floor.

An ice rink might not sound like a big deal, but in a state like Texas that’s legendary for sweltering heat, it’s still quite a novelty.

Kids especially love the ice, and it’s common to hear them begging mom and dad for a 30 minute skate pass.

I was standing on a terrace overlooking the rink on Friday, busy firing off some emails to my staff, when I overheard one such conversation.

It didn’t even register until I heard the mother say, “Kaden- you can’t go ice skating… you might fall down!”

The words immediately passed through my mental filter as if someone had just shouted out my name across the food court.

You might fall down? Duh. It’s a ten-year old boy on ice skates. Of course he’s going to fall down.

When I was a kid, my friends and I used to ride our bikes all over town by ourselves until it was dark.

Today that would be enough for our parents to be arrested… or at least paid a visit by Child Protective Services.

My friends and I chased each other around and played that occasionally got rough.

Now even ‘Tag’ has been outlawed in countless school districts who consider the game physically and emotionally distressing to children.

I only remember having to have a few inoculations as a child.

The CDC website doesn’t go back to the 1980s, but it does show that in 1995, the government only endorsed shots against five diseases for children.

Today it’s 14, and the actual number of shots has soared.

Again, I don’t know precisely when any of this changed. But it’s painfully obvious how different things are now for kids.

Major cultural changes like this always start in the home with what parents teach their children… as in, “Kaden, you might fall down.”

What is the big lesson that this child is learning? Because, “Kaden, you might fall down,” could just as easily be, “Kaden, you aren’t allowed to take any risks or try anything that’s new and challenging.”

And there’s certainly no shortage of challenges now.

The national debt now stands at $19.8 trillion. Social Security and Medicare are woefully unfunded, and many other government trust funds are flat broke.

The Federal Reserve has printed itself into near insolvency and created massive financial bubbles around the world.

Socialist dogma is growing stronger. The top 25% of income earners in the US already pay more than 80% of the taxes. And yet the bottom 50% wants you to pay even more of your ‘fair share’.

Being comfortable with major challenges and risk taking is more important than ever. And they’re a big part of any individual’s success in life.

Taking a chance on a new job on the other side of the country, successfully investing in the stock market, starting a new business… all of this requires being comfortable with risk and challenges.

But that’s not what children are being taught.

They’re being taught that they’re made of glass, and if they try anything difficult they might fall down and hurt themselves.

That’s not how life works. Everyone falls down.

Not to sound cliché, but it seems far more important to teach children how to get back up quickly.

And more importantly, teach them to figure out WHY they fell down in the first place and HOW they can get better.

This is the “Can-Do”, risk-taking, pioneering spirit that made the United States the wealthiest country in the history of the world.

And if those values aren’t passed down to the next generation, they will absolutely disappear.