PROOF that the US peaked during Ronald Reagan’s presidency 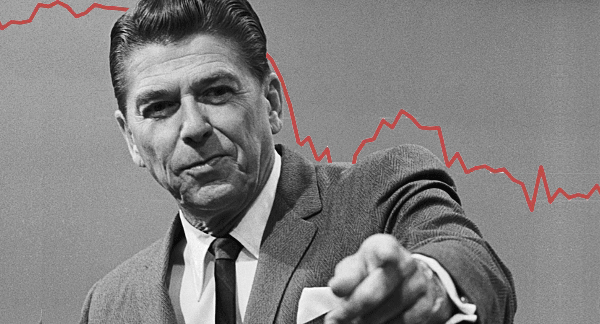 On March 16, 1936, the government of the United States published the very first edition of the Federal Register.

President Roosevelt had been taking a lot of heat over the previous year; under his New Deal program, dozens of government agencies were passing new rules, regulations, and codes at an absolutely feverish pace.

It became impossible for anyone to keep track of them—even the other agencies within the government.

So in the summer of 1935 they created a new law requiring every executive agency to publish a daily, official record of their activities.

This official record was called the Federal Register. And it would contain a complete set of every rule, regulation, code, and proposal issued by each of the executive agencies.

The first edition was published on March 16, 1936. It was sixteen pages.

Every single work day since then, without fail, the government has published the Federal Register.

The Federal Register exploded during the 1970s, in fact, touching nearly 90,000 pages by the end of the Carter administration.

During Reagan’s time, the publication shrank to under 50,000, only to rise again under subsequent presidents.

The longest edition ever published was logged at 6,653 pages in a single day, during the administration of Bush II.

President Obama has averaged nearly 80,000 pages per year, far and away the highest of any President in US history.

This morning’s edition, in fact, is a whopping 358 pages full of new rules, regulations, and proposals.

Did you read it? Neither did I. But as the old saying goes, ignorance of the law is not an excuse. 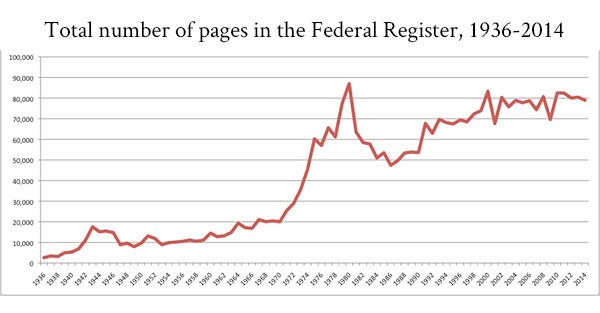 This is absurd. Every single one of those regulations makes people less free.

They criminalize the most innocent behavior and make it impossible for the average person to know what’s legal and what’s not as if we all have some some civic duty to read and memorize 80,000 pages per year of government regulation.

4,500 criminal statutes now exist under US Code. That’s 1,500 times more than the three crimes outlined in the Constitution– piracy, treason, and counterfeiting.

(Ironically, the Federal Reserve and commercial banks commit the latter on a daily basis…)

Under Diocletian’s reign, the Roman Empire’s body of laws and regulations multiplied like rabbits.

He centralized all aspects of the economy, controlling wages, prices, commerce, and agricultural activity. Violations in many cases were subject to the death penalty.

And when people complained, he told them that the barbarians were at the gate, and that individual liberty needed to be sacrificed for the greater good of security.

By Diocletian’s time, Rome was already bankrupt. His regulations pushed the Empire over the edge.

It’s not much different today. Each and every one of these obscure regulations COSTS MONEY.

So it’s not surprising that as the number of pages in the Federal Register has increased, so has the US federal debt.

In order to pay for all of this bureaucracy, every citizen has become subject to an increasingly complex and punitive tax system, enforced at the point of a gun by a bankrupt government desperate to keep the party going.

The US government is targeting its own citizens now more than they went after the Nazis. This is a 100% true statement, which I will explain tomorrow.