Some thoughts on the ‘longest bull market ever’ 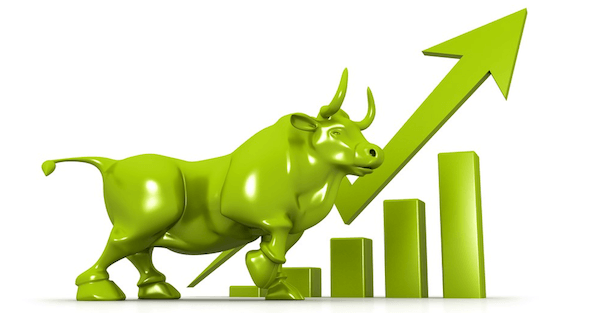 Well, it happened. Yesterday the US stock market broke the all-time record for the longest bull market ever.

This means that the US stock market has been generally rising for nearly a decade straight… or even more specifically, that the market has gone 3,453 days without a 20% correction.

That’s a pretty big milestone. And there’s no end in sight. So it’s possible this market continues marching higher for the foreseeable future.

But if you step back and really look at the big picture, there are a lot of things that might make a rational person scratch his/her head.

For example– the Russell 2000 index (which is comprised of smaller companies whose shares are listed on various US stock exchanges) is currently right at its all-time high.

Yet simultanously, according to the Wall Street Journal, a full SIXTY PERCENT of corporate debt issued by companies in the Russell 2000 is rated as JUNK.

How is that even possible– a junk debt rating coupled with an all-time high? It’s as if investors are saying, “Well, there’s very little chance these companies will be able to pay their debts… but screw it, I’ll pay a record high price to buy the stock anyhow.”

It just doesn’t make any sense.

Looking at the larger companies in the Land of the Free (which make up the S&P 500 index), the current ‘CAPE ratio’ is now the second highest on record.

‘CAPE’ stands for ‘cyclically-adjusted price/earnings ratio’. Essentially it refers to how much investors are willing to pay for shares of a company, relative to the company’s long-term average earnings.

And right now investors are willing to pay 33x long-term average earnings for the typical company in the S&P 500.

So at 33, investors are literally paying more than TWICE as much for every dollar of a company’s long-term average earnings than they have throughout all of US market history.

And it’s only been higher ONE other time– just before the 2000 stock market crash (when the dot-com bubble burst).

In addition to the CAPE ratio, the average company’s Price-to-Book ratio is also the highest since the 2000 crash.

The list of these record / near-record ratios goes on and on. Investors are also paying, for example, an all-time record Price-to-Revenue ratio… meaning that investors have never paid a higher price for every dollar of a company’s revenue… EVER.

The general narrative is that everything is awesome in the US economy and will apparently remain that way forever and ever until the end of time.

I certainly agree that there’s a lot of surface-level strength in the US economy right now.

But I really wonder about the long-term.

Just look at the average US consumer: despite the ultra-low unemployment rate in the US, average wages have barely budged.

Pew Research released a great article earlier this month showing that, for most US workers, their wages have been stagnant for DECADES after you adjust for inflation.

Plus we’ve all seen the statistics about how little the average American has stashed away in savings.

Federal Reserve data from the Survey of Consumer Finances shows the median bank account balance is just $2,900. And for those under 35 it’s just $1,200.

So I’m just curious where all these companies are going to get their long-term revenue growth. Who is going to be buying all their products? Because the US consumer seems pretty tapped.

(And if things are that bad in the boom times, just imagine what’s going to happen to US consumer behavior when recession hits again…)

And aside from the US consumer, there are also a lot of companies that are going deeper into debt.

I write about Netflix quite often, which has to take on billions of dollars of debt each year just to stay afloat.

But even bigger companies have bizarre, head-scratching problems.

Coca Cola is a great example– one of the oldest, most stable companies in the US market.

How does that make any sense?

This means that, after all expenses, accounting adjustments, and investments, the business generates enough money to pay investors a cash dividend worth 2.8% of the current share price.

How is it possible that that Coca Cola consistently pays its investors more money than the business generates? Easy. They just go into debt.

General Motors is another great example: GM pays its investors a dividend yield of 4.1%. And that’s super attractive. Yet GM’s Free Cash Flow is actually NEGATIVE.

There’s so much of this nonsense going on right now– companies going deeper into debt to pay dividends and support their share prices despite lackluster business performance.

But again, despite the rising debt (and the rising level of JUNK debt), investors are still willing to pay record high multiples for their investments.

This just doesn’t strike me as a great way to generate wealth and prosperity.