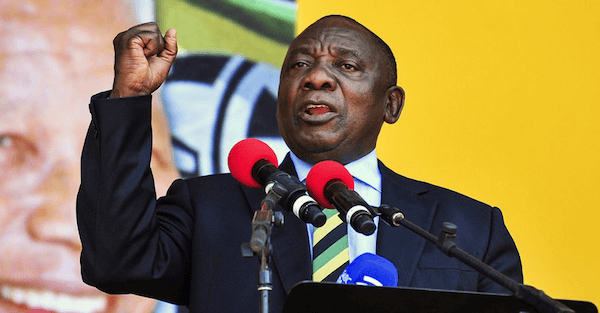 This is a big deal for South Africa.

The country has been suffering for nearly a decade under Zuma’s corruption.

And people are certainly hoping that the new President, Cyril Ramaphosa, will represent a positive, new chapter for South Africa.

Yesterday Ramaphosa addressed the nation’s parliament in Cape Town and made clear that his priority is to heal the divisions and injustice of the past, going all the way back to the original European colonists in the 1600s taking land from the indigenous tribes.

Ramaphosa called this “original sin”, and stated that he wants to see “the return of the land to the people from whom it was taken… to heal the divisions of the past.”

How does he plan on doing that?

“The expropriation of land without compensation is envisaged as one of the measures that we will use to accelerate redistribution of land to black South Africans.”

Ramaphosa minced no words: he’s talking about taking land from white farmers and giving it to black South Africans.

Astonishingly, he followed up that statement by saying, “We will handle it in a way that is not going to damage our economy. . .”

Wow, what a relief. For a minute it sounded like South Africa wants to do what Zimbabwe did several years ago.

That’s exactly what Zimbabwe did.

Thousands of white-owned farms were confiscated by the government, and the farmers were forced out.

Bear in mind that Zimbabwe used to be known as the breadbasket of southern Africa. Zimbabwe’s world-class farmers were major food exporters to the rest of the region.

But within a few years of Mugabe’s land distribution, food production plummeted.

Without its professional, experienced farmers, the nation went from being an agricultural export powerhouse to having to rely on handouts from the United Nations’ World Food Programme.

Hyperinflation and a multi-decade depression followed.

If there’s an economic model in the world that you DON’T want to follow, it’s Zimbabwe.

And you’d think that the politicians in neighboring South Africa would know that.

They had a front-row seat to the effects of Mugabe’s land redistribution, not to mention they had to absorb millions of starving Zimbabwean refugees who came across their borders.

Yet this is precisely the policy that they want to adopt.

However you might feel about social justice, it seems pretty clear that copying Zimbabwe is a pretty stupid idea… and will only end up hurting the people they claim to be helping.

Yet the president claims that they want to initiate a land redistribution program that won’t impact the economy or South Africa’s food security.

Yeah sure. And I want to be the starting quarterback of the Dallas Cowboys next season.

That’s because we have to live in a world with certain realities and limitations.

One of those realities is that land distribution, even if you believe the intentions to be noble, never works.

And of course, the most important reality is that anyone who willfully chooses to copy Zimbabwe’s economic model deserves to suffer the consequences of their stupidity.

[You can watch his remarks yourself here: the fun starts around 30:45]