Surprise! Guess which currency has stronger fundamentals— the dollar or… ruble? 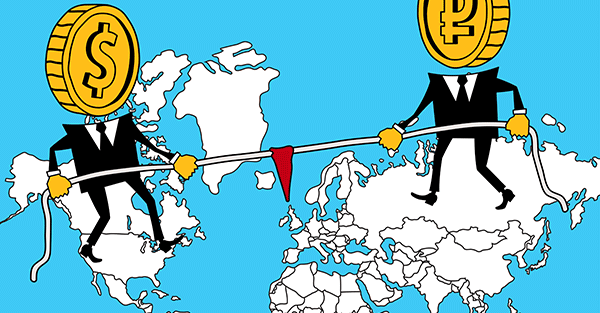 Last night, the Russian central bank announced a shock decision to hike up its key interest rate from 10.5% to 17%, effective immediately. Incredible.

On Monday alone the ruble declined more than 9% against the dollar, and almost 50% in 2014. It looks like a massacre.

If you listen to conventional financial news, they’ll all tell you that you’d have to be insane to own anything in Russia right now—stocks, bonds, currency, etc.

They’ll tell you that the ruble is in freefall, and that the dollar is the place to be.

But if you have been a reader of this column for any length of time, you know that I am a very data-driven person.

So… just for kicks, I decided to dive into the numbers and make an objective comparison between the US dollar and the Russian ruble.

First of all, I start off with the premise that ALL paper currencies are fundamentally flawed.

Our global monetary system is absurd—the idea of letting unelected central bankers conjure as much money as they want to out of thin air is simply insane.

But it is true that some fiat currencies have better fundamentals than others. And if you want to understand the health of a currency, it’s imperative to look at the ISSUER of that currency, i.e. the central bank.

As with any bank, one of the most important metrics in determining a central bank’s financial health is its level of solvency.

Specifically we look at the bank’s capital (i.e. net assets) as a percentage of its total balance sheet.

The US Federal Reserve only has a basic capital ratio of 1.26%. Talk about razor thin. (This is down from 4.5% just a few years ago)

That means if the value of the Fed’s assets declines by only 1.26%, the issuer of the world’s dominant reserve currency becomes insolvent.

What are the Fed’s liabilities? Open your wallet. Those green pieces of paper aren’t ‘dollars’. Just look. They have “Federal Reserve Note” (i.e. debt) printed on them.

So the Fed’s pitiful financial condition directly affects the value of the dollar over the long-term.

On the other hand, the Russian central bank’s ratio is 12.5%—literally almost TEN TIMES GREATER than the Fed.

Capital cushion is crucial because when the unsuspected happens, this is what can help keep you afloat.

Think about it: you might be able to keep going without savings, perhaps even accumulating debt, but only until something happens out of the blue.

Until your car breaks down, or you need to go to the hospital, for example. Then all of a sudden, your lack of capital can become a serious issue.

Another important metric is gold. As I mentioned, since all fiat currencies are fundamentally flawed, it’s important to see the amount of REAL ASSETS that a central bank holds in reserve.

In Russia, it’s 6.2%. And rising. Last year it was 5.5%, and the central bank is continuing to heavily stockpile more.

How much gold backs the dollar?

The Fed doesn’t own gold. It loudly proclaims this on its own website: “The Federal Reserve does not own gold.”

It holds ‘certificates’ which are redeemable for US dollars. But there’s not a single ounce of gold backing the US dollar.

So… with no gold and pitifully razor thin solvency levels, it really wouldn’t take much of a shock to topple the dollar.

By comparison, the ruble is much better capitalized and actually has something backing it.

Now, I’m not necessarily advocating to buy the ruble, but hard, publicly available numbers clearly demonstrate the discrepancy between “sentiment” and objective data.

And at a time when the ruble and the whole Russian economy have been beaten down so much that Apple alone is now worth more than the whole Russian stock market, Russian assets certainly make for an interesting speculation.

The bottom line, however, is—if you wouldn’t own the ruble, then what are you doing holding 100% of your assets in the dollar?