The 10th Circle of Hell 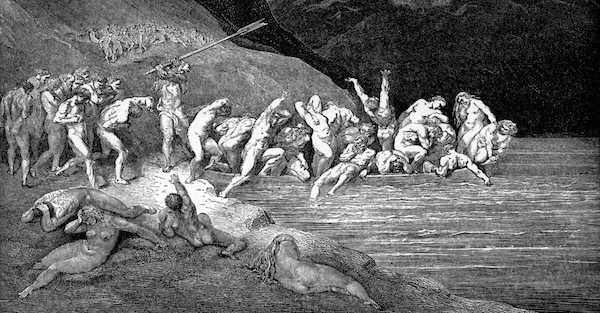 On the evening of March 25 in the year 1300, Italian poet Dante Alighieri stepped through the gates of Hell, passing beneath an overhead inscription that read “Abandon all hope, ye who enter here.”

Dante summoned all of his courage and proceeded, plunging deeper into the despair of hell.

This is the ‘Inferno’ tale of Dante’s Divina Commedia, an epic poem completed just before his death in 1321.

Dante’s version of hell is divided into nine concentric circles, each representing a different category of evil. The deeper they go, the worse the evil… and the worse the torment.

The Second Circle, for example, is for adulterers, who now spend eternity being rocked back and forth by strong winds.

The Seventh Circle is for violent murderers and tyrants, who are condemned to eternally drown in a river of boiling blood and fire.

Worse than murderers and tyrants, however, are the fraudsters and impostors who spend eternity in Circle Eight.

Dante views these white-collar criminals as a disease on society, and condemns them to spend eternity suffering from their own debilitating, painful diseases.

But he saves the worst for last: treacherous liars.

Standing near the center of hell, Dante comes across the Ninth Circle. It’s a frozen lake, where, trapped inside the ice itself, are those guilty of betrayal, violating the trust that had been placed in them.

Dante views this as the worst form of evil and invokes Biblical figures like Cain (who killed his brother Abel) and Judas Iscariot who are infamous for their betrayal.

It’s unfortunate that Dante stopped at nine. Because if there were a 10th Circle of Hell, I could nominate a few candidates.

I say that because I have unfortunately made a terrible mistake.

Off and on for the past few years, I was an investor in an arrangement that turned out to be a complete fraud. And a number of other people invested in this as well because of me.

The two people who ran the scheme spent years building a sterling reputation, all the while manufacturing phony documents, fake IDs, and mountains of evidence to prove that their operation was completely legitimate.

And they fooled a lot of very sophisticated people, including some of the most prominent investment banks and financial media in the world, in addition to external auditors, lawyers, etc.

Just like serial killers who go on a violent rampage, I’m not going to dignify these scumbags by mentioning their names. At least, not yet.

[We’ve already made efforts to notify anyone who may be affected by this fraud.]

One of the individuals has already been apprehended. And the other (I suspect) will soon be sporting a DayGlo orange jumpsuit.

Ever since I discovered this I’ve been working nearly round-the-clock to fix it. But because there’s still so much ongoing, I can’t say much else.

As I’ve told some of the other investors, I have no intention of broadcasting our battle plan to the enemy.

The larger point behind this letter is to simply let you know that I made a mistake.

I’ve spent nearly ten years writing this column, providing countless ideas and research. But I don’t always get it right.

And whenever that happens, I think it’s important to get out in front of it, acknowledge my mistake, and do everything I can to fix it.

As a final point, I also want to let you know about an important internal change here at Sovereign Man.

Some of you know that I’ve taken on a quieter role in the organization over the past two years while other people ran the day-to-day operations of the business.

Well, effective immediately, I’m back in the driver’s seat. And I’m looking forward to continuing this journey together with you, and with the exceptional team of professionals at Sovereign Man.