The biggest transformation story in the world 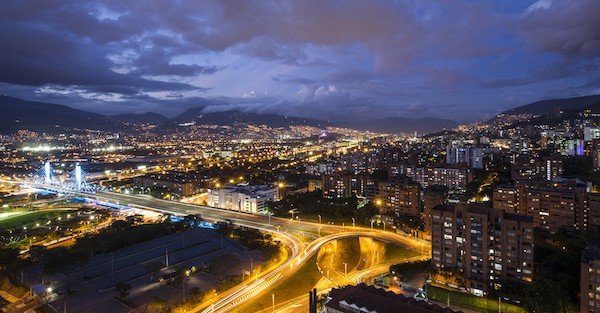 I’ve written before a number of times about the long laundry list of reasons why I base myself and most of my business operations in Chile.

I could go on forever about this, but in short the country presents an exceptional mix of business, investment, and lifestyle opportunities that are extremely difficult to find just about anywhere else in the world.

But people ask me a lot– if not Chile, where else?

Colombia is definitely on my short list. In fact if I weren’t in Chile, I’d almost certainly be either here in Colombia, or in Puerto Rico.

Colombia ticks many of the most important boxes.

The lifestyle here is just fantastic. In Medellin in particular, the eternal spring-like weather is hard to beat.

Colombia is also absurdly cheap. The cost of living is low, as is the price of residential real estate.

It’s also a lot of fun. From the city vibes to the laid back coffee culture, there’s something for everyone here, whether you’re a young digital nomad or retiree.

From an investment perspective, Colombia is emerging from decades of civil war, and that opens the door to some pretty extraordinary opportunities.

One of the biggest beneficiaries will be the country’s pitiful infrastructure, which is in desperate need of a major upgrade.

For years, the Colombian government never bothered building new roads and fixing the rail system because they figured the FARC would simply blow it all up.

Now with the peace locked in, massive new infrastructure projects have already begun.

The importance of this work cannot be overstated.

It had an extraordinary impact on the economy– cheaper electricity, more efficient transportation for goods and services, etc. Trade flourished as a result.

I’ve seen the similar effects first hand around the world, from Panama in the early 2000s to Myanmar today.

The same thing can happen in Colombia.

With modern, reliable infrastructure, trade and transportation will soar, and the multiplier effect across the economy could be phenomenal.

Moreover, the peace process has brought back tourists and foreign investors in droves.

Last year foreign investment in Colombia was 2.5x higher than in 2006, ten years prior. Tourism is up 3x from 15-years ago.

And we’re just at the beginning of these trends.

The sheer volume of capital flowing into this country has the potential to supercharge economic growth.

Entrepreneurs will find a treasure trove of opportunities here as well.

Several of the alumni from our annual Liberty & Entrepreneurship camp live here, and they’ve started some amazing businesses, in some cases achieving success by importing a business model that’s already working in North America.

I’m here in the country for a few days meeting with the Board of Directors of a company we invested in last year.

It’s a unique business– they’ll likely become the largest and most cost effective producer of medicinal-grade cannabis oil in the world, which is a $200 billion industry.

This industry didn’t even exist in Colombia two years ago. Now it does, thanks to recent legislation that has legalized production.

Rather than continue to wage a senseless and expensive war on plants that decimated this country for decades, the new legislation ensures that everyone, from foreign investors to local farmers, can prosper.

It’s a great example of the emerging opportunities that make Colombia place so compelling.

Of course, it’s not all rainbows and buttercups here. There are still risks.

One of the things that makes Colombia difficult is its painful bureaucracy.

Even simple, mundane tasks can be enormously time consuming.

It’s not just the high level of taxes that you have to pay, but the total number of taxes.

For example, in addition to a corporate tax of 25%, many companies have to pay an “income equality tax” of 9%, plus another “industry and commerce” tax, and then a financial transactions tax.

Then there are sales taxes and consumption taxes. Property taxes and payroll taxes. Tons of paperwork to fill out.

It can be debilitating, and they know it.

Last year I met with Colombia’s former president Alvaro Uribe at his home here in Rio Negro, and he agreed with me that the system needs to change.

They’re starting to move in that direction; there’s currently legislation in the works to reform Colombia’s Byzantine tax code and break up some of the bureaucracy.

So it’s definitely the right trend.

When you look at the big picture, it’s pretty astonishing.

A decade ago this country was still in the midst of a bloody civil war and dominated by murderous narco-guerilla groups.

The only two legitimate industries that even existed here were flowers and coffee.

Now Colombia is teeming with tremendous opportunities and has an incredibly bright future.

As one of my colleagues remarked this morning, it’s the biggest transformation story in the world.