The Hitler of South Africa tells white people he won’t kill them. . . yet 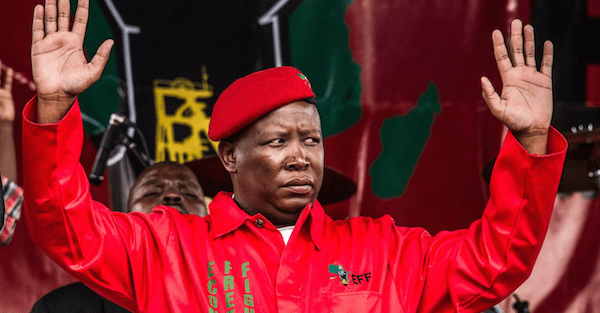 Earlier this week while most of the world was transfixed on the World Cup, the Trump/Kim handshake, or a multitude of other sundry events, Julius Malema, aka the Hitler of South Africa, was busy telling white people in his country that he’s not going wage genocide against them. Yet.

In an interview with TRT World News published this week, Malema said, “We have not called for the killing of white people. At least for now. I can’t guarantee the future.”

When the reporter mentioned that some people might view these remarks as a call to genocide, Malema responded, “Crybabies. Crybabies,” but later warned white South Africans that “the masses are on board” for “an un-led revolution and anarchy”.

Malema is a prominent politician in South Africa and at the forefront of his country’s movement to confiscate land from white property owners and redistribute it to the country’s black population.

No actual specifics about the plan have been revealed, of course.

So even if someone thinks this land grab is social justice, it’s at least reasonable to acknowledge the massive corruption that plagues South Africa’s government.

And presuming that a multi-billion dollar expropriation wouldn’t be fraught with graft is just plain naive.

There has also been zero acknowledgement that forced exprorpriation of private property would cause a wave of defaults on real estate mortgages, triggering a massive banking crisis and unforgiving recession.

South Africa already has a prime example about the economic consequences: Zimbabwe’s own land expropriation plunged that country into an economic cataclysm spanning two decades.

Yet these all seem to be irrelevant details.

Malema even went so far as to downplay Zimbabwe’s economic catastrophe, saying “You cannot [measure] the Zimbawean revolution based on the capitalist definition.”

I’m not sure what Marxist definition he’s using to measure success.

But we do know that two decades after land redistribution in Zimbabwe (which used to be considered the breadbasket of southern Africa), more than a quarter of the population is in danger of starving to death.

So even by the most basic metrics, Zimbabwe’s policies have been a total failure. Copying them is tantamount to suicide.

It’s truly astonishing that someone so dangerous and out of touch has been able to rise to power. And even more astonishing how quickly it’s happened.

A decade ago few people had heard of Malema. Now he commands millions and grows more powerful each day.

Swift, radical changes like this are common around the world, and throughout history.

In 1913, just a few years before the Russian Revolution, the Bolsheviks were a tiny group of radicals. Four years later they had taken over the entire country.

In 1928, the Nazi party was an obscure joke, winning a mere 2.6% of the votes in the national election that year.

Not even five years later, Adolf Hitler was German chancellor and had been awarded supreme power by the Enabling Act of 1933.

Point is, the world can change very quickly.

That’s why I’ve long been a strong advocate for having a Plan B.

It’s great to maintain a positive outlook and remain hopeful for the future. I certainly do. But sometimes circumstances don’t turn out like we hope.

Acknowledging these possibilities doesn’t make you a pessimist or an alarmist.

Rather, it’s rational and prudent to take basic, sensible steps to protect what you care about most, and what you’ve worked so hard to achieve.

For example, if you keep 100% of your wealth and investments domiciled in the same country where you live, you’re taking on unnecessary risk… especially if your home country is heavily indebted and legendary for civil asset forfeiture and frivolous lawsuits.

One sensible tactic would be to consider moving at least a small portion of your wealth to a different jurisdiction known for strong asset protection laws.

Another idea– some people may be surprised to discover that they’re eligible for citizenship in another country due to some long-lost ancestor.

Ireland, Poland, Italy, Spain, and a number of other countries all have laws making it possible for descendents of their nationals to become citizens.

And a second passport is a great asset . It ensures that, no matter what happens, you’ll always have another option… to travel, live, work, invest, do business, and bring your family.

That’s the whole point of a Plan B. You might not ever need it. But if you can prudently reduce your risk at minimal cost, there’s absolutely no downwide in having one. It just makes sense.