The ridiculous return of the Zimbabwe dollar 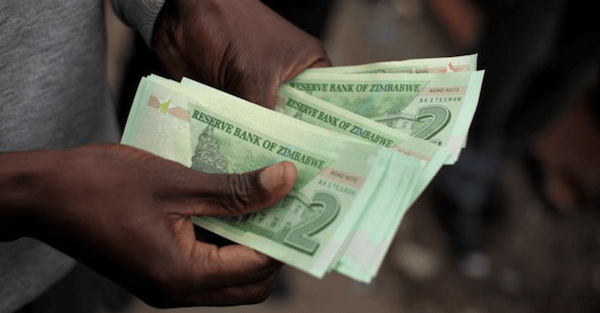 Recently some idiot teenager in Britain edited an image of Prince Harry into something that was stupid and racist.

This moron clearly intended to be offensive. His photo depicts the prince (who married Meghan Markle) with a gun to his head and the caption, “see ya later race traitor.”

It was such a primitive thing to do, and an even worse thing to believe. But does his stupidity actually constitute a ‘crime’?

In the UK it apparently does.

The teen was sentenced to over four years in prison for creating the image.

Even more, he was convicted of encouraging terrorism, and possessing terrorist materials.

His actions are completely indefensible. But it’s even more concerning that the UK is so easily applying a ‘terrorism’ label to anything they deem offensive… and throwing people in jail over it.

Zimbabwe is back to its old tricks.

In 2009 Zimbabwe abandoned its currency altogether after its legendary episode with hyperinflation devalued the Zimbabwe dollar to Z$35 QUADRILLION per $1 USD.

And for years, the US dollar has been widely used in Zimbabwe as a sort of unofficial currency; everything I’ve ever purchased on my multiple trips to the country has been in US dollars.

Then a couple of years ago, Zimbabwe introduced a type of bond that was officially pegged to the US dollar, but in reality worth much less.

Now Zimbabwe’s government has re-introduced its own currency and banned the use of all other foreign currencies, including the US dollar.

Prices have already skyrocketed, and they are currently looking at 100% inflation this year. Curiously, Zimbabwe’s president called this an “important step in restoring normalcy to our economy. . .”

Three [biologically] female athletes from Connecticut have filed a discrimination lawsuit against the state for its policy of allowing transgender high school athletes to compete based on the gender they identify with.

The girls say they have lost out on championships, and possibly even scholarships, because they cannot compete against transgender athletes– students who were born males but identify as females.

Frankly, I don’t care what people do in their personal lives. It doesn’t matter to me if someone identifies as potted plant.

But it’s completely asinine to see a bunch of politicians who ignore basic common sense in a desperate attempt to show off how ‘woke’ and progressive they are.

Duh, of course there are natural, biological differences between males and females. This is especially obvious in sports.

Undoubtedly there are countless females who are in far better shape and have superior athletic abilities than men. I know plenty of them.

I also know that women can accomplish any physical feat– one of my classmates from West Point was among the first female graduates of the US Army’s Ranger school, one of the most grueling and physically demanding ordeals on the planet.

But if you compare championship-caliber male and female athletes side-by-side, there is no contest: men are faster and stronger.

Case in point: the fastest female sprinter (100 meter dash) in the 2016 Olympics won the event with a near world record 10.71 seconds.

That time would not have even advanced her past the first round in the men’s competition.

One step closer to de-criminalization of marijuana

The US House of Representatives has passed a bill that would prevent the federal government from intervening in state laws regarding cannabis.

The bill is a rider, meaning it is not a stand alone bill, but attached to a budget bill for 2020.

This is the farthest Congress has gone towards getting the Federal government out of marijuana policy.

Since 2014, they have passed similar measures preventing the Federal government from intervening in state medical marijuana policy.

But this is the first time they have moved to protect states with legal recreational marijuana from federal intervention.

If you’re like me and don’t use cannabis– this is still a really interesting story… because as marijuana is slowly decriminalized, it will continue to create a booming industry and substantial business and investment opportunity.