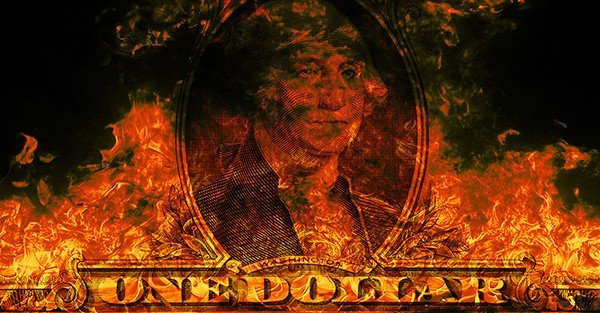 On October 22, 1981, the national debt in the United States of America hit $1 trillion for the first time in history.

It had taken the US federal government over two centuries to reach that mark. And in that period, America had won its independence and built a nation from scratch.

How Much is The US in debt?

And all of that– across over two centuries of US history– collectively registered one trillion dollars in debt.

(More than half of that period was an era devoid of any income tax whatsoever!)

Yet despite taking two centuries to hit $1 trillion in debt, it took just a few decades to add another $9 trillion, growing the debt ten fold.

On September 30, 2008 the debt crossed the $10 trillion mark for the first time. And it’s never looked back since.

They waged war in the Middle East multiple times on multiple fronts.

They waged the War on (of) Terror.

And when financial crisis struck yet again, they bailed out the US banking system.

Look, I disagree with the vast majority of this spending.

It turns my stomach to think about all the debt that was accumulated to bail out irresponsible banks, wage wars, or engage in genocide.

But even though I don’t agree with all of it, it’s at least clear where the money went.

For the first $1 trillion in debt, there were some pretty tangible results. Independence. Defeating the Nazis. Etc. Big stuff. There was some return on that investment.

For the next $9 trillion, you could at least argue that there were some actual results, like vanquishing the Soviet Union.

Today, less than eight years after hitting $10 trillion, the US government reports that it hit the $19 trillion mark (which technically happened on Friday).

But what do they have to show for it?

It’s not like anyone defeated the Nazis or Soviet Union over the last 8 years.

By 2008 the banks had been bailed out, and the world had supposedly been saved.

Where did all the money go? What real, tangible results do they possible have to justify the last $9 trillion in debt?

Even more strikingly, compare the first trillion dollars in debt (which took two centuries to accumulate) versus the most recent trillion (which took 14 months).

What grand act took place in the last 14 months to justify another trillion dollars in debt? Nothing.

Yet in the past 14 months, both the Disability Trust Fund and the Highway Trust Fund ran out of cash.

And the Federal Reserve became insolvent on a mark to market basis.

It’s extraordinary. They have reached such diminishing returns now that they can manage to squander a TRILLION dollars and have absolutely nothing to show for it.

To me, that’s the scariest part of the debt story.

It’s not the total amount of the debt.

It’s how quickly and easily they can fritter away $1 trillion dollars on absolutely nothing without any trace of benefit.

The Congressional Budget Office recently reported that government debt will reach $30 trillion within a decade.

Given that it took them just 9 years to rack up the last $10 trillion, I’m sure that’ll happen much more quickly than they expect.

But whether you decide to believe me or the government, either way it’s clear that this is only going to get much worse.

This leaves you with essentially two options:

1) Stick your head in the sand (or somewhere else) and pretend like this can go on forever without consequence;

2) Recognize how ludicrous this situation is, and prepare for the obvious consequences.