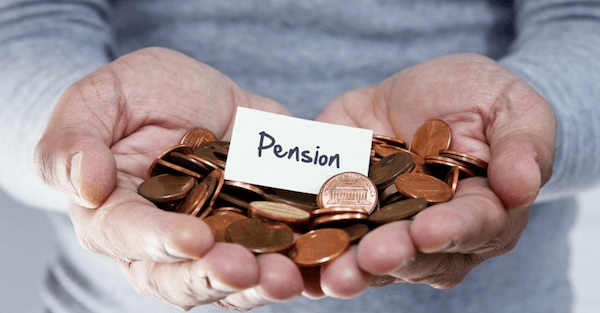 If your retirement plans consist entirely of that pension you’ve been promised, it’s time to start looking elsewhere.

As you probably know, pensions are giant pools of capital responsible for paying out retirement benefits to workers.

And right now many pension funds around the world simply don’t have enough assets to cover the retirement obligations they owe to millions of workers.

In the US alone, federal, state, and local governments, pensions are about $7 TRILLION short of the funding they need to pay out all the benefits they’ve promised.

America’s private pensions are in bad shape too — a total of around 1400 corporate pensions are a combined $553 billion in the hole. Plus, 25% of those funds are expected to go broke in the next decade. But the pension problem is much bigger than just what’s happening (though the US problems are SEVERE).

In 2015, the total worldwide gap in pension funding was $70 TRILLION according to the World Economic Forum. That is larger than the twenty largest economies in the world combined.

And it’s only gotten worse since then…

The WEC said that the worldwide pension shortfall is on track to reach $400 trillion by 2050.

And what solutions did they suggest?

“Provide a ‘safety net’ pension for all.” You know, sort of like Social Security… which as we mentioned is $49 trillion in the hole. Not exactly a sound solution.

Another solution the WEC offered was to increase contribution rates– in other words, forcing current workers pay more to support retired workers.

Only one problem with that… global demographics are awful. There just aren’t enough young people being born to pay out benefits for retirees.

And that problem is coming to a head in South Korea, where about 13% of the population is currently of retirement age: 65 or older.

And, you guessed it, there aren’t close to enough people being born to burden that load.

This is a nightmare scenario for pensions (in addition to fact that low interest rates have made the returns pensions need to break even basically unachievable).

But worry not, South Korea has an answer for the problem…

The government spent $113 billion over the past 12 years trying to get people to have more kids (I’m curious what this money was spent on… removing condom dispensers from bathrooms?).

But more importantly, this should give you a hint of how the government views you… Much like a dairy cow. Not enough milk? Breed more cows!

But for all the money and effort, South Koreans are actually having FEWER babies– a decline of 1.12 babies per woman in 2006, to just 0.96 this year.

So when you look a few decades out, South Korea clearly isn’t going to have enough workers paying into the pension system to support all the retired beneficiaries.

Even the government acknowledges this. And they’ve already started managing expectations…

One of the government’s proposals is to slash retirement payments by 10%.

At the same time, the government wants to increase current contributions (i.e. payroll TAX) by almost 50%.

These people have been planning their futures based on promises the government has been making for decades. Unfortunately, those promises have no basis in reality.

And if you think higher pension contributions and lower payouts are contained to South Korea, you’re nuts.

Earlier this year, the US Office of Personnel Management proposed $143.5 billion worth of pension cuts for current AND already retired federal workers.

But that’s a band-aid on a bullet wound… It won’t actually come even close to solving the problem. You know more cuts will come.

Remember, US government pensions are $7 TRILLION in the hole. And the demographics are just as bad (the US currently has the lowest fertility rate on record).

Look, I’m not trying to be alarmist. These are just the cold hard facts that everyone needs to understand.

We’re talking about long-term challenges to retirement. But it’s retirement… ergo we’re SUPPOSED to think long-term about retirement: years, decades out. Retirement requires having a plan.

Or, in this case, a Plan B… as anyone depending on a pension or social security for retirement is out of luck.

Governments have lulled hundred of millions of people into a false sense of security based on financial promises they are not going to be able to keep.

It’s not a political problem. It’s an arithmetic problem. And one they’re unable to solve.

While you might not be able to fix the pension gap in your home country, you can definitely secure your own retirement.

There’s no need to rely on empty promises and broken pension funds. With some basic planning, education, and a bit of early action, you can safely sidestep the consequences of this looming financial crisis that is larger than the world’s 20 largest economies combined.

Here’s a great, free resource to get you started.