This former trillionaire is flat broke 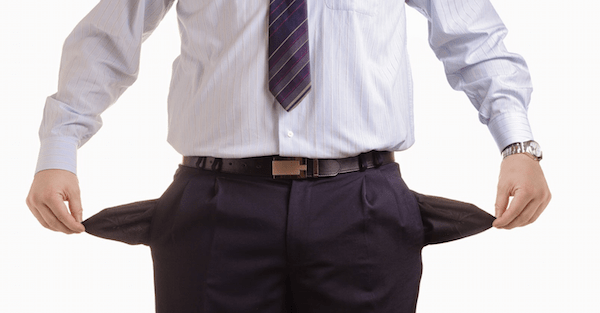 To commemorate the occasion, I thought I’d republish that first article… because I think it still captures the challenges we face, as well as the boundless solutions ahead of us.

I hope you enjoy.

He has dealt with lawsuits, jail time, bankruptcy, and now lives on food stamps.

It seems strange to think that he used to be a multi-millionaire… but it’s true. In 1988 he won $16.2 million from the Pennsylvania lottery (valued at $30 million in today’s increasingly worthless money), and Bud became drunk on his own wealth.

You’ve probably heard similar stories—the struggling, working class lottery hopeful hits it big in the Powerball only to return to the trailer park, broke, within a few years.

They become careless and foolish with their wealth, spending enormous sums of money on opulent consumer goods, gambling trips, and nights in the champagne room.

Banks line up to provide them with generous lines of credit that they blow on useless toys or handouts to a fawning entourage.

At the height of this bubble, someone like Bud has fame, wealth, power, friends, women, houses, yachts… but no foundation for the future.

Each trip to the ATM is a missed opportunity to make a smart decisions… but Bud never cared. He thought the money would last forever. He thought the banks would always give him a loan. He thought his friends would never leave him.

Then one day Bud went to the ATM and found that his balance was ZERO. He went to the bank for a loan and was declined. The money was gone. His friends had disappeared.

The lawsuits started rolling in. Suddenly poor Bud found himself with absolutely nothing but distant memories of drunken consumption.

Sound familiar? It should. Bud is the United States of America.

America hit the lottery after World War II. We had defeated the Germans, nuked the Japanese, and remained the only developed country in the world that had not been devastated by the war. The US instantly became the richest kid on the block, and like Bud, spent the next several years in an alternate universe devoid of rational thinking.

Decades of poor financial decisions were made based on the idea that the money would never run out.

LBJ fought a costly war in Vietnam while building the Great Society.

Barrack Obama thinks he can provide universal healthcare while bailing out every malignant company in America.

The common theme here is the avoidance of difficult choices. When Bud went to buy a new car and saw five that caught his eye, he bought all of them and built a bigger garage.

America’s politicians have made a similar series of irrational choices for decades, and now the money is gone… all that remains is America’s winner syndrome.

We’ve been winners for so long we don’t know any other reality. We live in a bubble world where the United States is the biggest, richest, smartest, most powerful country on earth, even though mounting evidence suggests otherwise.

We continue to spend like Bud as if we are wealthy lottery winners, still assuming our God-given right to avoid tough decisions.

Individually, such delusional behavior and separation from reality are symptoms of a severe mental illness.

If the collective body of America’s politicians were a psychological patient, he would be locked up as a danger to himself and society.

We call this affliction winner’s syndrome, and it continues to plague the decision making process in the halls of Congress. The only antidote is a healthy dose of reality and rationality.

At any point, Bud could have pulled himself out of his downward spiral with a little clear thinking, a little less ‘yes we can,’ and a little more ‘maybe we can’t…’

Clear thinking could still save America. If we take it on the economic chin, allow our businesses to fail, and restructure the economy, the United States will come out of this slump stronger than before.

Unfortunately, there are no near-term indications of rationality in Washington… though while the country may be on a slide, clear thinking could still save you– and that’s where we come in.

Clear, rational thinking in today’s world means considering the full range of global opportunities to invest, protect yourself and safeguard your assets.

We specialize in these opportunities; we travel the world in search of the best lifestyle choices, financial deals, privacy options, and asset protection strategies, some of which we’ll share with you in this daily letter.

Whether this is your first day, or you’ve been with us since the beginning, thanks from the bottom of my heart for being part of this thriving community.