This guy got destroyed by the system 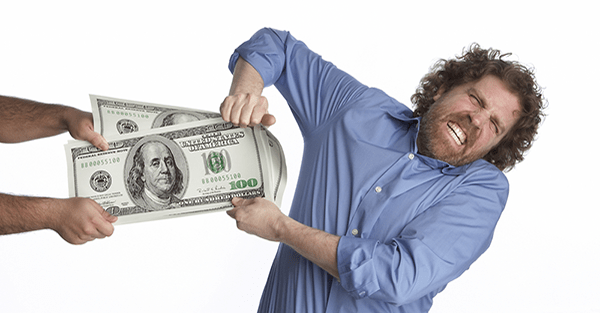 My friend Richard got destroyed by the system.

As a financial advisor in Sacramento, California, he spent years building a thriving firm and has even landed a few celebrity clients.

But back in 2008 things started to turn sour.

His wife left him and took the kids, along with half of everything else.

The divorce forced the liquidation of many of their assets, including a substantial investment portfolio he had built up.

Richard didn’t want to sell; by the time the divorce was being fought, it was 2009 and the stock market had crashed.

But Richard had no choice. They liquidated and suffered major losses.

Most painfully, since Richard’s business was so successful, the judge ordered him to pay alimony of nearly $20,000 per month.

It didn’t matter that, practically overnight, most of his new business had dried up due to the Great Recession.

The idea behind alimony is to make sure that the ex-spouse can maintain a comfortable standard of living while s/he gets rebuilds a life and financial base.

It shouldn’t be abused as a lottery ticket.

In Richard’s case, it’s been 7+ long years and nearly $2 million in alimony paid. But the payments never stop.

Even though the kids are now grown and out of the house, his ex-wife has zero incentive to go out and find a job to support herself.

Why would she bother working hard when she can do nothing and collect $20k from her ex-husband?

Yet due to the length of time they were married, and California’s ridiculous legal code, there’s no end in sight for Richard’s alimony payments.

So Richard has the government taking 50% (between federal and state income tax) from his left pocket, and his wife taking nearly a quarter of a million dollars per year out of his right pocket.

Naturally if he stops paying either one of them he’ll face the long arm of the law.

Speaking of the law, the Dodd-Frank Act that was passed several years ago to reform the financial system totally crippled his business.

It’s one of the costliest and most painful regulations ever created for financial services businesses, and Richard constantly has regulators breathing down his neck.

It’s amazing. Despite taking half of his income, the government makes it increasingly difficult for Richard to produce.

Richard turned 50 this year, and he was miserable.

Instead of slowing down and enjoying life, he’d been working harder than ever to earn less than ever, with very little time left over to build a personal life for himself.

His problems also started to manifest in other ways. He’d gained weight, and was drinking more, and I doubt he’d gone on a date since 2013.

Sadly, Richard is not an isolated case. There are countless people across the country who have been destroyed by the system.

He came to me for help earlier this year, which I was more than happy to extend.

Initially we established a new financial advisory business for Richard in a more favorable jurisdiction.

That jurisdiction was Puerto Rico.

Under Puerto Rico’s generous incentive laws, Richard’s new firm is able to provide financial services for worldwide clients without the pain of onshore US regulations.

It’s made things much easier for him so that he can focus on servicing his clients’ needs and winning new business, as opposed to filling out forms and pleasuring regulators.

The new firm is growing rapidly as a result. And best of all, his Puerto Rico profits are taxed at just 4%, instead of the 50% he was paying in California.

Richard still has the California business. And to reduce the taxes there, my advisors set him up with something called a “Captive Insurance Company”.

This one is a real goldmine.

These are all legitimate, tax-deductible business expenses.

A “Captive Insurance Company” is a separate business that you might own or control, which basically acts as your own insurance company.

This is completely and totally legal, and there’s an entire section on this in the US Tax Code.

Like any insurance premium, the premiums you pay to your own insurance company are tax deductible to your original business.

So Richard’s California-based financial advisory firm is able to deduct the insurance premiums that it pays to Richard’s captive insurance company.

Under US law, captive insurance companies qualify for tax-free status as long as their net premiums are below $2.2 million per year.

For example, his captive company insures his financial advisory firm against risks like cybersecurity and civil unrest.

It makes sense for any business to insure against these risks.

The California company’s profit is now lower, which means that it pays less tax.

Meanwhile, the insurance premiums paid to his captive insurance company are subject to ZERO tax.

So he’s paying less federal and state tax from the California business, 4% tax in Puerto Rico, and 0% tax on his insurance company’s profits.

These are just two of the steps that we’ve taken. But the end result is pretty clear.

Richard is less-regulated, so he’s able to focus more on building and growing his business.

He’s earning more, and he’s able to keep more of what he earns.

Most of all he’s happier. He’s laid off on the booze, started hitting the gym, traveling more, and actually having a personal life.

It’s been a huge transformation.

All that it took to completely turn his life around were the proper tools to solve his problems, the knowledge about how to use them, and willingness to execute.