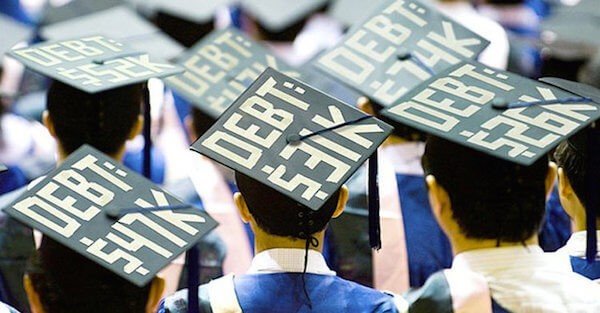 We’ve all seen the headlines: the cost of university education in the United States has become completely debilitating. And student debt keeps rising to record high levels.

It’s almost commonplace now for a 22-year old to graduate from university with $50,000+ in student debt.

According to data from the Federal Reserve, the total amount of student debt in the United States is now $1.5 trillion.

That’s more than the estimated $1.3 trillion in direct costs that the government spent fighting the War in Iraq.

What’s probably even more bizarre is that the US government actually owns about 70% of those student loans– a total of $1.06 trillion.

I discovered this over the weekend when I was reviewing the federal government’s recently published financial statements for fiscal year 2017.

Student loans actually constitute the #1 asset of the US federal government, comprising about 30% of its balance sheet.

In other words, young people of America owe more money to the federal government than the value of every tank, every bullet, every aircraft carrier, every acre of land in the national parks.

And remember that student debt in America is a very special kind of debt: it chases you around forever.

Thanks to a piece of legislation signed into law by Bill Clinton in 1998, student debt is almost impossible to ‘discharge’.

So unlike just about every other type of debt like a home mortgage or medical debt, student debt is extremely difficult to wipe away through bankruptcy procedures.

It’s more a form of indentured servitude than it is debt. There’s no escape.

To me, this really calls into question the long-term value of a university education.

Now, there’s a lot of data on this topic, and it’s all over the board.

A 2016 study in the United Kingdom by the Institute of Fiscal Studies, for example, showed that median salaries for graduates at several dozen universities were lower than non-university graduates.

On the other hand, researchers from the Federal Reserve Bank of New York have argued that university graduates will earn, on average, $1 million more over their lifetimes than people who do not graduate from university.

This is what they call the ‘wage premium’ of a university degree.

But even their own data shows that this wage premium is falling.

Another study from the UK’s Warwick University in 2012 calculated that a university graduate’s wage premium had fallen 22% in a decade.

Factoring in the steep cost (and stress) of student loans, university is not an obvious choice anymore.

When you’re staring down the barrel of $50,000 owed to the federal government, you don’t have the luxury to take a year off, travel the world, and learn a foreign language.

Or to NOT take a job and start a business.

Or to take a lower paying job where you’ll learn more.

You’re relegated to the first available option that pays down the most debt.

And that certainly has a long-term impact.

I also feel like all of these studies are flawed; they’re not really making an apples-to-apples comparison.

Students attend university because they’re making an investment in themselves… in their education.

So rather than simply comparing the wages of university graduates to non-graduates, it would make more sense to compare graduate salaries to the earnings of other people who made ‘non-university investments’ in their education.

I’ll give you an example.

One of my closest friends is Matt Smith. I’ve known him for over 10 years, and, in addition to being a great friend, he’s also a brilliant businessman who has become phenomenally successful many times over.

But Matt didn’t learn how to start, build, and run a successful business by indebting himself at university.

He briefly attended college, but dropped out.

Instead of spending his 20s in a university classroom, Matt focused all of his resources and energy to find talented entrepreneurs that he could work for… and learn from.

He moved around a lot, going wherever he had to go and taking whatever shit job was necessary, sleeping on the floor if he had to, in order to learn from successful people.

When he first started out, he knew absolutely nothing about business.

But over time as he watched, listened, and practiced, Matt developed the skills and experience that have been so integral in his own success.

It’s a simple premise when you think about it– if you want to be successful, learn from successful people.

It’s not to say that a university education is a waste of time and money (though an electrical engineering degree is probably a better investment than majoring in ‘18th century lesbian studies’).

The point is that going to university and racking up $50,000 in debt solely for the sake of obtaining a piece of paper is bad idea.

Any investment– especially the one you make in yourself and your education– requires careful thought and planning.

That’s precisely what Matt did.

He didn’t attend university. But his deliberate plan to build up his business skills was clearly an investment in his education… and one that paid off handsomely.

As a final point, I’d like to mention that Matt is one of my co-instructors at the annual entrepreneurship workshop that we hold in Europe each summer.

This is a FREE event that our educational foundation been sponsoring for nine years: five days of life-changing, intensive mentorship from successful entrepreneurs.

It’s a significant investment of our own time and money in the businesses and financial education of our attendees… and it’s one of the highlights of my year.

But with only ~50 slots available, the selection rate is highly competitive.

The application deadline is coming up soon; so if you’re interested, you can learn more at www.sovereignacademy.org.