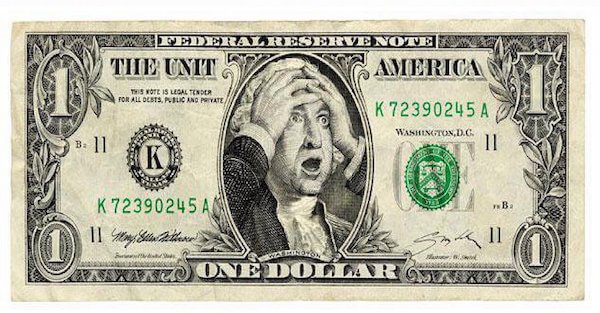 Earlier this month, the United States government released its annual financial report for the year 2017.

This is something the government does every year, similar to how large companies like Apple, or Warren Buffett’s Berkshire Hathaway, publish their own annual reports.

Unlike Berkshire and Apple, though, whose financial reports typically show strong, positive results, the US government’s financial statements are a complete horror show.

Right at the beginning of the report, the government explains that it’s “net loss” for the year was an unbelievable $1.2 TRILLION.

It’s larger than the size of the entire Australian economy… and constitutes a loss of more than $2.2 million per minute.

This is not a conspiracy theory or irrational fantasy.

This is the Treasury Secretary of the United States of America publicly announcing that the federal government lost $1.2 trillion on page ‘i’ of its annual financial report.

What’s even more alarming is that 2017 was a great year.

There was no war. No recession. No epic financial crisis.

In his introductory letter, in fact, the Treasury Secretary proudly stated that “[t]he country enjoyed a pick-up in [economic] growth in 2017. Unemployment is at its lowest level since February 2001, consumer and business confidence are at two-decade highs, and inflation is low and stable.”

In short, everything was awesome in 2017.

Even the government’s overall revenue was a record high $3.3 trillion for the year.

Yet despite all that good news… despite all those positive developments and record revenue… they STILL managed to lose $1.2 trillion.

If the government loses $1.2 trillion in a GOOD year, how much do you think they’ll lose in a BAD year? How much will they lose when they actually do have a recession to fight? Or another war. Or a major banking crisis?

More importantly, how long can something so unsustainable possibly last?

But the fun doesn’t stop here.

Further in the report, the government reviews its own assets and liabilities… effectively calculating its “net worth”.

The end result is your net worth. And hopefully it’s positive.

The government’s is hopelessly negative: MINUS $20.4 trillion. (See page 55 of the report.)

And that’s worse than its result from the previous year’s MINUS $19.3 trillion– meaning that the government’s net worth decreased by about 6% year over year.

To be clear, a net worth of negative $20.4 trillion means that the government added up the values of ALL of its assets. Every tank. Every aircraft carrier. Every acre of land. Every penny in the bank.

And then subtracted its enormous liabilities, like the national debt.

The difference is negative $20.4 trillion, i.e. the government has far MORE liabilities than it has assets.

If the government were a business, it would have gone bankrupt long, long ago.

On top of that, though, the government separately calculated its long-term liabilities from Social Security and Medicare.

As we frequently discuss, both Social Security and Medicare are running out of money.

And according to the government’s own calculations (on page 58), the “total present value of future expenditures in excess of future revenue” for Social Security and Medicare is MINUS $49 TRILLION.

Essentially this means that the two largest and most important pension and healthcare programs in the United States are insolvent by nearly $50 trillion.

Altogether, the government is in the red by almost $70 trillion.

It’s remarkable that this is not front page news.

There has not been a single utterance from mainstream media about the pitiful, dangerously unsustainable finances of the federal government.

I’m certainly not suggesting that the sky is falling, or that there’s some imminent disaster that will strike tomorrow morning.

But any rational person needs only look to the pages of history to find dozens of examples of once dominant powers who were crippled by their excessive debts.

It may take several years to feel the full impact. But it would be utterly foolish to believe that this time is different.