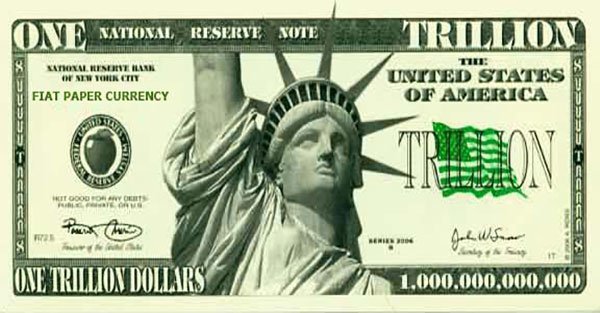 Every year around this time the US federal government releases an annual financial report to the public.

It would be hilarious if the numbers weren’t actually true.

Just like Apple or Exxon, the government’s annual report contains several important financial statements and detailed commentary about their finances and operations.

But unlike Apple, Exxon, the government can’t manage to turn a profit. Ever.

Bear in mind, there was no major wars, recessions, or crises to fight.

What did you really receive in exchange for that trillion-dollar loss?

The sad reality is that it now costs the government so much to run itself, along with paying massive interest on the debt and supporting all of its entitlement obligations, that they lose $1 trillion even in a “normal” year.

What will happen in a bad year?

Then there’s the issue of the government’s “net worth”.

After adding up all of its assets (like tanks, aircraft carriers, government buildings, etc.) and subtracting liabilities (the national debt), the government’s “net worth” was MINUS $19.3 trillion at the close of the 2016 fiscal year.

The US federal government is insolvent, plain and simple.

This isn’t some wild conspiracy theory. It is a statement of fact based on publicly available data published by the US government itself.

It’s concerning that the government of the largest economy in the world is bankrupt.

But it’s even more concerning that more people aren’t concerned.

Naturally most of us have been programmed to believe for decades that the US government is rich and always pays its obligations.

This is a dangerous fantasy.

Yes, the government has been able to continually destroy its finances for years without consequence.

And for that accomplishment they should be awarded some special Nobel Prize in Ponzi Schemes.

But history is packed with examples of once-dominant empires who eventually declined under the weight of their unsustainable finances, from the French monarchy to ancient Rome.

Are we really supposed to believe that this time is any different?

Are we really supposed to believe that the US government can continue to indefinitely lose $1 trillion dollars per year without consequence?

Sure, it’s great to hope for the best. And maybe, just maybe, they manage to fix everything.

But it would be dangerous to bet everything you’ve ever earned or plan to achieve on such an unreasonable expectation.

When nations go broke, there are consequences. Simple.

And once again, history is generous with examples, from the nationwide bank account freeze in Cyprus in 2013, to Iceland’s capital controls following the 2008 crisis, to the wage and price controls of Emperor Diocletian in ancient Rome.

In each of those instances there were probably countless people who either chose to be willfully ignorant or simply hoped that their politicians would fix everything.

Rational people don’t choose to be ignorant, especially when the government itself puts this data in black and white.

Nor do rational people bet everything on hope.

They have a Plan B. And later this week we’ll discuss some key elements of yours.