We’ve seen this movie before 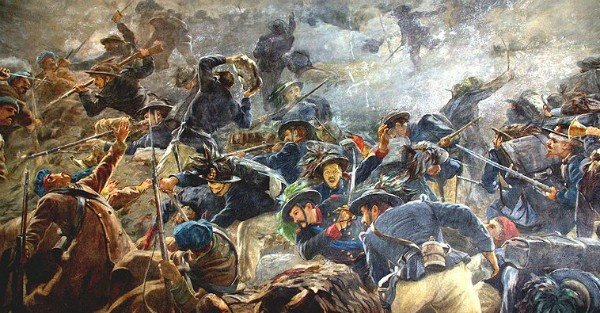 Today just happens to be the 160th anniversary of Britain and France’s declaration of war on Russia in what would eventually become known as the Crimean War. Part 1.

At the time, Russia was a rising power. By the 1850s, Tsar Nicholas I had expanded Russia’s domain into Ukraine and Crimea seeking warm water ports on the Black Sea, and it scared the bejeezus out of the rest of Europe.

Other nations in the region– particularly France and the Ottoman Empire, were in obvious decline. By 1854, the Ottoman Empire was only a few years away from outright default, and France was desperate to regain some of its geopolitical glory from the previous century.

All of this should sound familiar. As Mark Twain said, history might not necessarily repeat, but it certainly rhymes.

Today there is conflict once again in Crimea. And just as before, it has nothing to do with Crimea, but with several other powers trying to keep a rising power in check.

Let’s be honest– most human beings don’t get terribly excited when they get surpassed by someone else. Nations are no different.

And just as in the 1850s when France, Britain, and the Ottoman Empire ganged up to contain Russia’s growth, most has-been, bankrupt Western nations are doing the same thing today.

The hypocrisy is unbelievable. US Secretary of State John Kerry stated in an interview that “you just don’t, in the 21st century, behave in a 19th century fashion by invading another country on a completely trumped-up pretext.”

Apparently Mr. Kerry slept through the War on Terror and invasion of Iraq.

I have serious doubts that this will actually come to blows, however. Perhaps gentlemanly fisticuffs at most. The West is simply too broke.

Putin is the guy who blew $50 billion just to stage the Olympics. And that’s probably just a fraction of his own personal fortune, let alone how much money Russia has at its disposal.

It would be nothing for the Russian government to fund a war in Crimea. The Russians can write a check for it.

The West, meanwhile, has to beg, borrow, and print just to get a warship to the Black Sea.

In fact, just to demonstrate how broke they are, the West’s best move was suspending Russia from the G8, a toothless gang of bankrupt nations.

I mean– the combined debts of just five of the G8 members– the US, UK, Italy, Japan, and France is so prodigious it constitutes nearly 50% of the entire world’s GDP. It’s insane.

Successful negotiations always start from a position of strength. And the West has absolutely none. No teeth. No funding. No leverage.

This became quite clear just a few months ago when Mr. Putin chased everyone out of Syria.

By dropping Russia, even temporarily, from the G8, all they are doing is shining a spotlight on their own weakness… and rather embarrassingly.

They’re proving beyond a doubt that the G8 has no power… and practically shoving Russia into bed with China.

This is a classic example of how formerly great powers accelerate their own decline. And Mr. Obama and his colleagues seem to be following this playbook to a T.