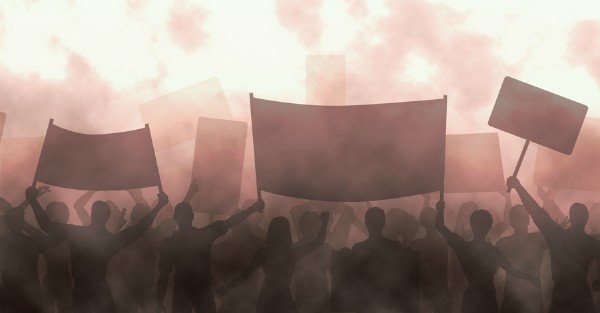 It was a scene just like out of the Wild West.

18-year-old David Moreyra had stolen a purse. And an angry mob gathered in broad daylight in Rosario, Argentina to lynch him.

It turns out that ‘mob justice’ is on the rise in Argentina, and Mr. Moreyra’s death was just one of more than a dozen recent instances.

Hundreds of years ago during the Age of Enlightenment, liberty-minded philosophers argued that governments could only derive their authority to govern by receiving consent of the governed.

And that the people would have to voluntarily surrender some of their freedoms to government in exchange for certain services (and protection of their other freedoms).

This idea has become twisted and mutated over time.

These days, the prevailing model is that [some] people pay taxes, and in exchange the government maintains a monopoly over a number of public services.

Security is one obvious example since, for most people, the local police force maintains a monopoly over citizen security.

Any high school economics student can tell you that most monopolies are terribly inefficient.

Yet this is what people have been indoctrinated to believe—that they need the government to protect them. And they’re willing to pay ever-increasing taxes to ensure the government can provide it.

In many cities and countries across the world, they’re even willing to give up their right to bear arms… to give up some personal freedom… in exchange for the government providing a generally inefficient service.

Many of the public services that government has promised get curtailed, or cut entirely.

The people have held up their end of the bargain. They’ve traded in their freedoms and their income in exchange for services. But the government hasn’t held up theirs.

And because the government has a monopoly on many of these services, suddenly people find themselves without something they have come to depend on.

This is precisely what has happened in Argentina. As the economy continues to struggle from an absurd level of money printing, unemployment and inflation are both painfully high.

Many Argentines are desperate. Crime rates have soared. But the police are utterly worthless.

Once peaceful citizens have been driven to desperation as a result. They’re afraid… and they’re taking matters into their own hands, roaming the streets in lynch gangs.

This isn’t some neighborhood watch or citizen justice program.

They form these gangs out of desperation, signalling that Argentina’s social contract has completely disintegrated.

It’s a rather unfortunate regression for a society. Civilized people don’t form angry mobs to act as judge, jury, and executioner.

As I’ve long-written, there are consequences to destructive economic policy.

Central bankers cannot conjure infinite quantities of currency out of thin air, nor can politicians borrow more money just to pay interest on what they’ve already borrowed, all without consequence.

This is one of those consequences—a complete breakdown of the social contract, giving rise to something so Medieval as lynch gangs and mob justice.

Can it happen where you live? Maybe. No nation is immune to the social effects of economic decay (think Detroit, or even New Orleans after Hurricane Katrina…).

When every shred of data suggests that major western economies are decaying rapidly under the weight of excessive debt and paper currency, it’s foolish to presume that ‘it can’t happen here’.