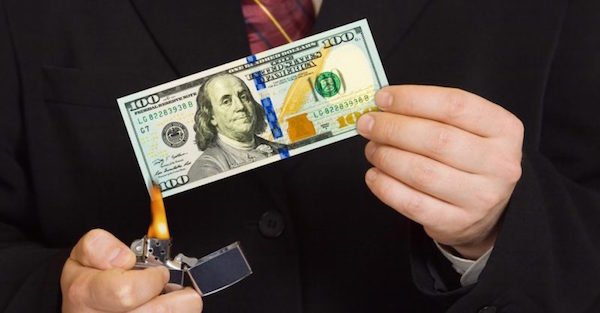 Last June, in one of the most egregious displays of economic insanity, Argentina was able to raise $2.75 billion by selling bonds with a ONE HUNDRED YEAR maturity.

Even more miraculously, the bond turned out to be wildly popular with investors.

So basically investors willingly forked over billions of dollars to a country that has a history of defaulting on its debt, confiscating private assets, and engaging in rampant corruption… for an entire century.

It’s as if everyone was oblivious to Argentina’s past. The country has defaulted twice just in the last twenty years, and eight times since its independence in 1816.

So the chances that Argentina DOESN’T default within the next century (or even the next decade) is slim to none. And slim’s out of town.

11 months later, reality is starting to set in.

Investors have begun to realize that Argentina doesn’t actually have any money, that inflation is more than 25%, and the central bank has blown through $8 billion (more than twice the amount of the bond issuance) trying to prop up their weak currency.

Oh yeah, and the Argentine government has asked the International Monetary Fund (IMF) for an emergency $30 billion credit line to remain solvent.

The worse things get for Argentina, the deeper the bond plunges in value; earlier this month it was worth about 83 cents on the dollar.

And while making 100-year loans to an insolvent country with a long history of default is especially insane, it’s important to realize there are a lot of “Argentinas” out there today.

For example, more than 20% of the companies in the Russell 2000 index and nearly 10% of S&P 500 companies need to borrow money just to pay interest on their debts.

Plus a full 50% of the entire, investment-grade corporate debt market ($2.5 trillion in paper) is rated just one notch above junk.

And what do troubled governments and companies do to get out of this jam of too much debt? They borrow more money…

But that becomes more difficult and expensive as interest rates rise.

And this cycle only compounds the problem.

Now, you might be thinking, “OK Simon, but big deal. I’m not dumb enough to buy Argentina’s bonds, or invest in loser companies.”

But due to the interconnectedness of our modern financial system, even if you’re not DIRECTLY buying a toxic asset, you’re probably exposed to someone else who is.

Think about it: even if just you own a basic index fund, you’re exposed to dozens of insolvent companies.

Your life insurance company. Your pension fund. Your bank. The fixed-income mutual fund where you invested your retirement savings.

Any of these could have easily scooped up a bunch of Argentina bonds. Or loaned money to any number of countless insolvent businesses or governments.

Ever heard of JP Morgan? They loaned money to Argentina.

So did Fidelity and Invesco. And those are just a few of the big names.

It was the same phenomenon back 15-years ago prior to the Global Financial Crisis.

In the early 2000s, banks were providing no-money-down mortgages to borrowers with pitiful credit, then rolling thousands of these loans together into gigantic bonds.

These bonds became some of the most popular investments in the world.

My guess is that you probably didn’t own a single one of those toxic bonds.

But your bank did.

So did your pension fund. Brokerage. Or some company that you might have invested in, like Lehman Brothers or AIG.

(Lehman went bankrupt, and AIG has never recovered from its losses.)

You were financially exposed to somebody else’s stupidity.

And due to the incredible lack of transparency in the banking system, the truth is, you’ll NEVER know if you’re exposed to these risks.
Bernie Madoff is an even better example…

Some people lost every penny they had, and they hadn’t even heard of Bernie Madoff.

But they had money in a pension fund that invested in some feeder fund that gave money to Bernie.

They were three degrees of separation away from Madoff and they STILL got wiped out.

The reality is, you’re exposed to this stupidity whether you realize it or not because you’re probably exposed to someone else who’s invested in this financial lunacy.

That’s one of the reasons I’m holding so much cash outside of this complex, interconnected system.

Specifically, I’ve been buying 28-day Treasury bills for most of the last eighteen months.

These T-bills are basically like a 4-week certificate of deposit that’s held by the Treasury Department.

I make just under 2% per year, and I know exactly who my counterparty is: Uncle Sam.

That’s compared to 0.02% in a checking account, and I have no idea what’s on that bank’s balance sheet.

Now, if you’ve been a reader of this letter for more than a week, you know I have zero confidence in the US government’s ability to repay its massive debts over the next several decades.

And I think you have to be certifiably insane to buy a 30-year bond issued by the US government. That’s way too far out into the future.

But 28 days? That’s pretty low risk. However you feel about Donald Trump, he’s probably not going to default by next month.