You have two options. One can bring you a world of opportunity. 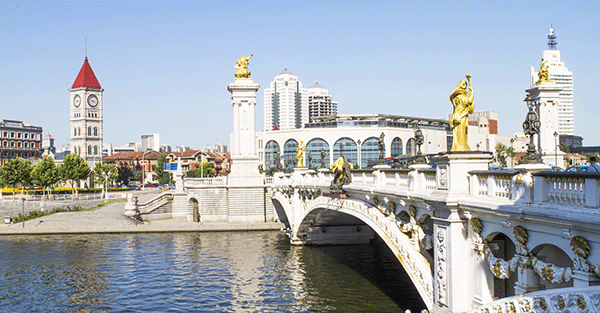 Walking across a bridge with ornate classical Roman sculptures trimmed in gold,
I turned down a little Italian street to meet up with a friend for lunch.

As the aroma of pizza wafted around me, I couldn’t help but feel that something was out of place.

It wasn’t the food. It wasn’t me. In fact, it was the street itself.

Because despite all the evidence around me, I wasn’t actually in Italy. I was in Tianjin, China.

Here in the midst of sky-high apartment buildings is a little Italian neighborhood, a historical remnant of the days when the port city was sectioned off by the Western powers.

The Middle Kingdom had once been the most technologically and culturally advanced in the world, but from thinking they were at the top, they had stopped trying to learn from those around them.

So confident in their superiority the Chinese elite had no idea how far from the top they’d fallen.

Thus, when Westerners came to Chinese shores seeking to open up trade, they were flatly rejected.

After all, what did these white devils have to offer them? Were the Chinese supposed to be impressed by these cheap, boring pieces of cloth? Anyone could tell that Chinese silks were far superior.

(Remember, at one point it was the British that were the ones with the cheap manufactured goods.)

With better weaponry and cheaper industrial goods the Western powers easily overwhelmed the Qing empire, saddling the government with huge indemnities and forcing the door open for them to enter the country and trade.

Unrest began to stir across the country. In 1900 this culminated in the anti-foreign ‘Boxer Rebellion’ that launched attacks on foreign businesses and people in Northern China.

Eight of the foreign powers united to quash the rebellion, and once they did, the foreign states took the port town of Tianjin and split it amongst themselves as payback.

No person, business, or country likes to find out that they’ve lost their edge. But the sooner that fact is accepted, the quicker they can get to learning and improving in order to regain that dominance.

In that situation there are essentially two options: you can either get angry and try to reject the fact that the world is changing or you can position yourself to take advantage of it.

Choosing the first option, the Boxers’ actions actually led to greater Western control of China. Achieving exactly the opposite of what they’d intended.

Whereas those that decided to work with the foreigners not only survived, but thrived, taking advantage of the influx of capital, knowledge and cheap products.

Deeply submerged in debt and with increasingly slowing economies, the US and Europe are facing the same two options today as China did merely a century earlier.

Rather than the Italian Concession in Tianjin, we are now seeing an influx of Chinese to Italy.

Businesses that can’t keep up with the heavy regulatory and tax burdens imposed by the Italian government are looking to sell, and the Chinese have the capital and interest to buy.

So while the economy may look bleak in Italy, thanks to globalization there is still an abundance of business opportunities there.

Take for example the three guys who created www.vendereaicinesi.it, which quite literally means “sell to Chinese”. The concept is simple—to help connect the Italian sellers of businesses, real estate and etc. with the Chinese market—and they’re doing great.

The simple shift in attitude, to view outsiders as an opportunity rather than a threat creates a new whole world of possibilities. Those who do that stand to profit most.