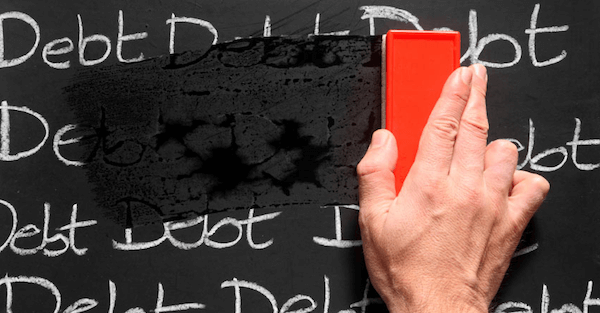 When all the tribes of Israel still lived in their holy land, they practiced something called the Jubilee.

According to the Book of Leviticus, the Jubilee existed because the Israeli land actually belonged to their god Yahweh…. and the current owners were just borrowing it (sounds like land ownership today – try not paying your property taxes and see who really owns your land).

So every 49 years, the Israelites would celebrate by freeing slaves, redistributing property and forgiving debts.

Of course, a 49-year cycle where debt is forgiven and land is returned to previous owners is ridiculous… markets can’t function under this system. Imagine buying a piece of land and not knowing if you have to give it back down the road… or lending someone money with the possibility that those debts just disappear and you get nothing back for the risk you took.

The Jubilee originated sometime around 1406 BC, so you would think it’s ancient history.

The US government is a record $21 trillion in debt and running $1 trillion annual deficits.

US corporations have a record $9 trillion in debt – with nearly half of that debt maturing in the next five years (meaning the businesses either have to roll that debt into a new loan or pay it back).

Consumer debt – which includes credit card debt, auto loans and student debt – is already at a record high and should pass $4 trillion in 2019.

But the largest portion of consumer debt is student debt. Yes, Americans have borrowed $1.5 TRILLION to earn degrees of questionable use.

As I wrote in a previous Notes:

According to the latest stats, the average student loan debt in the US is nearly $40,000.

And the US Department of Education guarantees 90% of that debt. Which means you, the taxpayer, guarantee that debt. If the borrower defaults, YOU’RE on the hook.

What are the chances millennials will make good on the debt? Not great…

According to a recent Fed study, millennials are much poorer and indebted than previous generations.

Even if they are financially able to repay student loans, you then have to question their will to do so when you can do so many other cool things with the money…

Like this  YouTube bro  who made a video bragging about using his financial aid money to take his girlfriend on a trip to Thailand.

Loans issued in 2012 are defaulting at a faster rate than ever before. Interest rates are only rising.

Over 44 million Americans owe student loans, and according to the Federal Reserve, 11.2% of them are delinquent (at least 90 days late) or in default.

It’s hard enough to pay back your loans if you study medicine to become a doctor, or something else that could lead to a relatively high paying career.

But now 22-year olds are graduating with $200,000 of debt, and all they have to show for it is an undergraduate degree in underwater basket weaving.

No direction. No plan. Just a useless degree.

There are even almost 2 million Americans over the age of 62 who still owe a combined $62 billion in student loans. That’s over 32 grand per borrower over 62.

I don’t think Social Security is going to cover that… even if by some miracle it stays solvent.

Given these headwinds, we’ve been wondering how on earth this crushing student debt load will ever be paid back.

And I think we just got our answer.

This month, Secretary of Education Betsy Davos agreed to forgive $150 million worth of student debt.

Here’s the thing… Betsy Davos did NOT want to forgive this debt. She fought to change the rules, but an Obama era forgiveness policy was enforced by the courts.

So if one of the meanest women in government can’t stop this debt from being forgiven… just imagine if we had someone like Bernie Sanders or Kamala Harris steering the ship.

And who do you think is going to come after Trump?

Trump was America’s response to Obama. And the next pendulum swing will be even greater to the left.

If you ever wondered why I think it’s a moral obligation to pay as little taxes as possible, this is it.

If you want to give the government your dollars to fund YouTube bro to go to Thailand, go ahead.

I’ll be in Puerto Rico, paying a 4% corporate tax rate and 0% capital gains.

Maybe I’ll see you down here.